The 2020 Edelman Trust Barometer reveals that despite a strong global economy and near full employment, none of the four societal institutions that the study measures—government, business, NGOs and media—is trusted. The cause of this paradox can be found in people’s fears about the future and their role in it, which are a wake-up call for our institutions to embrace a new way of effectively building trust: balancing competence with ethical behavior.

A GROWING SENSE OF INEQUITY IS UNDERMINING TRUST

Since Edelman began measuring trust 20 years ago, it has been spurred by economic growth. This continues in Asia and the Middle East, but not in developed markets, where income inequality is now the more important factor. A majority of respondents in every developed market do not believe they will be better off in five years’ time, and more than half of respondents globally believe that capitalism in its current form is now doing more harm than good in the world.

The result is a world of two different trust realities. The informed public—wealthier, more educated, and frequent consumers of news—remain far more trusting of every institution than the mass population. In a majority of markets, less than half of the mass population trust their institutions to do what is right. There are now a record eight markets showing all-time-high gaps between the two audiences—an alarming trust inequality.

Against the backdrop of growing cynicism around capitalism and the fairness of our current economic systems are deep-seated fears about the future. Specifically, 83 percent of employees say they fear losing their job, attributing it to the gig economy, a looming recession, a lack of skills, cheaper foreign competitors, immigrants who will work for less, automation, or jobs being moved to other countries.

These issues will require higher levels of cooperation among our institutions; no single entity can take on these complex challenges alone. But only about one-third of people believe that business does a good job of partnering with NGOs or government.

Business must take the lead on solving the trust paradox because it has the greatest freedom to act. Its immediate mandates are clear. An overwhelming number of respondents believe that it is the duty of business to pay decent wages (83 percent) and provide retraining for workers whose jobs are threatened by automation (79 percent). Yet less than a third of people trust that business will do these.

People today grant their trust based on two distinct attributes: competence (delivering on promises) and ethical behavior (doing the right thing and working to improve society). This year’s Trust Barometer reveals that none of the four institutions is seen as both competent and ethical. Business ranks highest in competence, holding a massive 54-point edge over government as an institution that is good at what it does (64 percent vs. 10 percent). NGOs lead on ethical behavior over government (a 31-point gap) and business (a 25-point gap). Government and media are perceived as both incompetent and unethical. 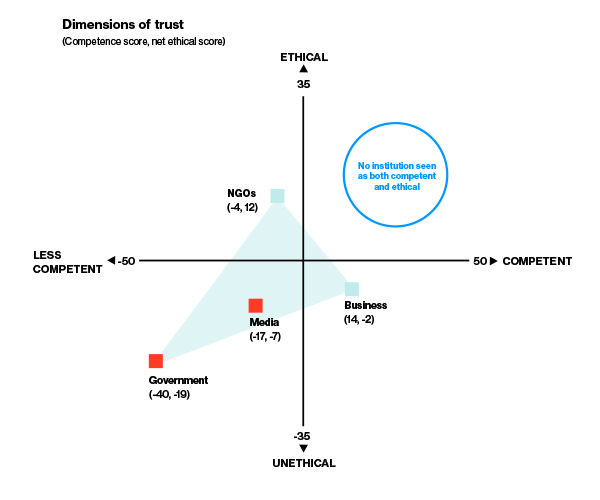 Trust is undeniably linked to doing what is right. After tracking 40 global companies over the past year through our Edelman Trust Management framework, we’ve learned that ethical drivers such as integrity, dependability and purpose drive 76 percent of the trust capital of business, while competence accounts for only 24 percent.

PARTNERSHIP: AN OPPORTUNITY TO BUILD TRUST

This year, we asked Edelman Trust Barometer respondents to tell us how well each institution is doing on a long list of issues that are challenging society. The most consistently low score for NGOs, business and government is on partnership, with each institution not seen as a good partner to the others.

Retraining for jobs is a critical issue that will require partnership between business and government. More than four in 10 say they trust business the most to solve this problem, but it can’t solve it without the help of government.

On this issue and others, collaboration is a major opportunity for our institutions to advance society—and build trust.

The 2020 Trust Barometer is Edelman's 20th annual trust and credibility survey. The research is conducted by Edelman Intelligence, a global insight and analytics consultancy.