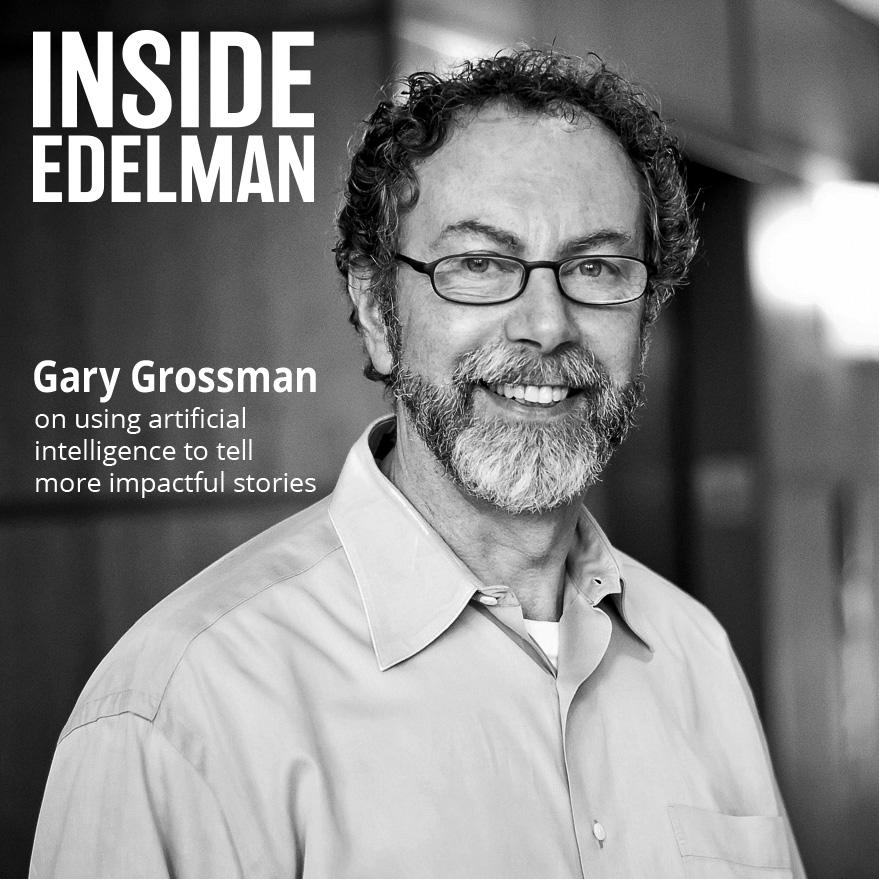 We caught up with Gray Grossman (senior vice president, Portland), who also leads Edelman’s AI Center of Excellence, to discuss how he utilizes his knowledge of artificial intelligence to help our clients tell more impactful stories.

What is your role and how long have you been at Edelman?
I've been in Edelman for almost seven years and my role has shifted during that time. I was hired in primarily to work with a semiconductor company that produces computer processors, because I have both a PR and a technical background in enterprise computing. Over time, my role has shifted and more recently I've become a deep technology specialist across the network - specifically focusing on AI, but not only on AI.

How do you describe what you do to your family and friends?
I take pretty complicated technology and distill it in layman's terms.

What kind of work do you do for clients?
I do a lot of writing for them. Sometimes clients have a difficult time again distilling what it is that they think is interesting about their line of work, so I'm able to write op-eds and various contributed articles on their behalf. I also do a lot of press release development as well as a lot of storytelling and story mining. Oftentimes I work with clients just to have them talk about what it is that they do and what their technology can do, then I figure out where the story is.

How did you think to mix a technical background with communications?
How did a role like this come about? It was a curious route. In high school I was the editor of my newspaper and in college I was the photographer for the college paper, so journalism is sort of in my background. But somewhere along the way I wound up studying cybernetic systems in college, which is fancy, but it really is systems analysis. That led into programming and a career initially writing software. Then I became an enterprise consultant for Hewlett-Packard for a number of years working on large enterprise accounts. I was traveling half of the time in that role and I wanted to get off the road, so I looked around in Portland and found a PR agency that worked with technology clients.

You are the Global Lead of Edelman’s AI Center of Excellence? Can you explain that further?
It's a virtual team across the globe, people who have regular responsibilities for their clients and for their offices, but in addition they keep close watch on AI. So, when we have a client opportunity or a new business opportunity in particular where we need AI expertise, we can call upon this group of people who can contribute their insights and brainstorm ideas.

In your opinion, what's the coolest or most interesting thing happening in AI right now?
There are so many cool things happening in AI, everything from healthcare and improving medical diagnostics to autonomous vehicles. Every industry is seeing profound changes and we're just in the early days. If this was a nine-inning baseball game, we're barely in the bottom of the first. The changes to come are going to be dramatic and radical.

What are some of your favorite and most innovative projects you've worked on Edelman?
This one really didn't have a whole lot to do with AI, it was more about virtual reality on behalf of my semiconductor client. The company wanted to promote their graphic processing units and the application of that for virtual reality. We actually worked with the Associated Press with their first virtual reality (VR) newsroom. It started as an idea of doing 360-degree videos, which is a form of VR, but then they wanted to go into full-fledged VR, so we brokered a deal between the two companies to create these virtual reality newsrooms. That was very fun and exciting.

What are some of your favorite things about working at Edelman?
There are really smart people at Edelman. People genuinely want to work together and for the common benefit of the team. I have worked in other places and at another PR agencies where that was not necessarily the case, there was much more competition amongst the team than cooperation. I really like the kind of esprit de corps we have here.

What are some of your favorite things to do outside of work?
My number one favorite thing to do is photography - I've sort of been a lifelong practitioner. I was a photographer for my college paper, mostly that was shooting sporting events or plays, but over time that has evolved to a love of nature and wildlife and travel.

What are you reading right now?
I'm reading one called The Overstory, which is apparently been shortlisted for the Booker Award.

Inside Edelman is an ongoing series that spotlights our colleagues who are doing extraordinary work across our network.